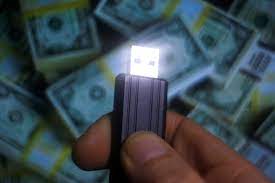 Fadey awoke at 9 a.m. on the day Russia declared war on Ukraine to a barrage of Telegram messages from pals inquiring about the situation in the western city of Lviv. He understood his country was under siege after a short perusal of the news. He made the decision to leave.

Fadey is 20 years old and has wanted to be named only by a pseudonym in order to preserve his privacy, as Ukrainian people aged 18 to 60 are conscripted. To get away from frontline duties, they had to clear the border before officials could lock it down. He needed two things right away to do this: a negative Covid test and money. “I couldn’t withdraw cash at all,” Fadey told CNBC, “because the lines to ATMs were so long, and I couldn’t wait that long.” As a result, he switched to bitcoin.

According to CNBC, Fadey made a peer-to-peer (P2P) transaction with a friend, exchanging $600 in bitcoin for zloty, the Polish national currency, which he then used to pay for a bus across the border, a hostel bed for him and his girlfriend, and some food.

That crypto transaction’s speed and simplicity were crucial. Ukraine closed its borders to all men of fighting age within two hours of Fadey’s safe transit into Poland. Fadey also crossed the border with a USB stick carrying 40% of his life savings, or around $2,000 in bitcoin. That thumb drive, along with a one-of-a-kind passcode, proved to be the key to his financial survival. “All I had to do was put my seed word on a piece of paper and carry it with me,” Fadey added.

Fadey’s experience exemplifies some of bitcoin’s most fundamental characteristics: It’s cross-border, doesn’t require a bank, and is password-protected, making it far more difficult to steal than cash. In the previous four weeks, about a fourth of Ukraine’s population has been displaced, and the country’s financial system has been stretched.

As the invasion progressed, ATMs around the country ran out of cash, and some individuals waited in lines for hours only to be told that their transactions were limited to $33 per transaction. After the central bank halted electronic currency transfers on the same day that Russia invaded the country, transferring money out of national bank accounts proved futile as well.

Fadey claims that he is unable to move his fiat-based savings to Poland, but that the impact of crypto has been mitigated. His net worth is split between his monero stake, which he retains on cryptocurrency exchange Binance, and his Ukrainian bank account after his bitcoin holdings.

Maria Chaplia is another Ukrainian national who has relocated to Poland. She first became interested in cryptocurrency when her Ukrainian bank refused to allow her withdraw a significant amount of money, and PayPal’s fees were too exorbitant for her. “With crypto, it was much easier,” she said.

Many of Chaplia’s Ukrainian friends are “extremely, very deep into crypto,” but she says that putting some of her money into bitcoin, ethereum, and tether functioned as a kind of digital gold for her: a means to deposit it for protection and forget about it.

“I used to be cynical of crypto,” she admitted, “but because of the war, I had no choice but to give it a shot.”